Hawai`i Speaks Out Against Trump's Ban on Muslims!

World Can't Wait issued a Call for a Protest against Trump's ban on Muslims on Saturday evening.  By Sunday morning other organizations, including Hawaii J20 and the Honolulu Women's March, notified their membership.  As a result, more than 200 people joined Sunday's protest on short notice. This is unprecedented in Hawai`i, and this momentum must be continued and built upon!

There are many things you can do.  Meet with your churches about setting up a sanctuary.  Speak out in your classrooms and at work.   Put a sign in your window:  "Refugees are Welcome Here."   For more suggestions for actions in Hawai`i we encourage you to go to the Hawai`i J20 website and facebook page.   For news about protests elsewhere, as well as materials, go to RefuseFascism.org

Following are photos from the protest at the Honolulu International Airport: 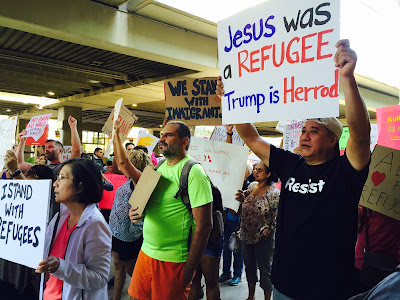 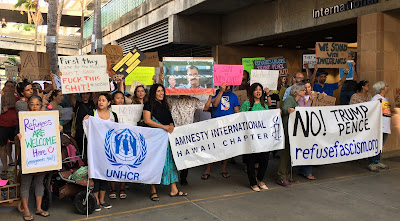 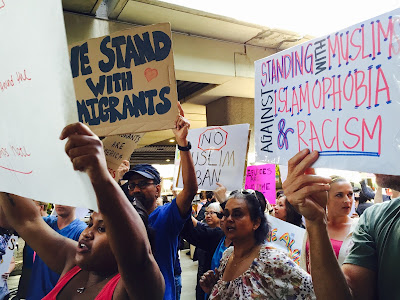 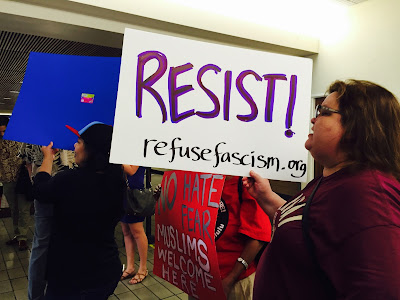 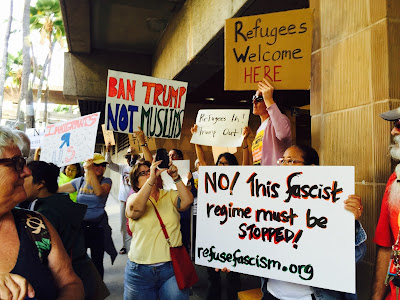 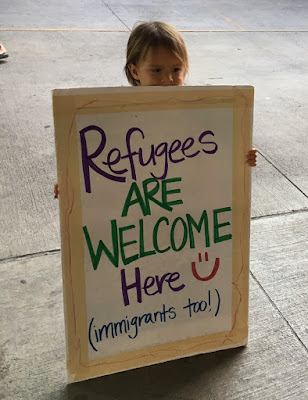 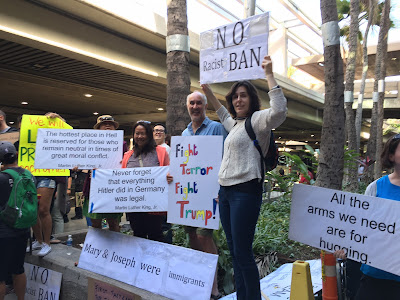 Posted by World Can't Wait Honolulu at 12:08 PM No comments:

World Can't Wait-Hawai`i in the streets!!

This blog will only speak to some of what World Can't Wait Hawai`i was involved in organizing last week, but it's just a tiny part of what happened throughout the U.S. and around the world.   Literally millions hit the street.  Marches, speak-outs, concerts, art shows and performances and so much more.  The world changed this week.  Now the task before us all is to sustain and expand this change.  To face the horrors of the Trump/Pence agenda with courage, spirit, and a determination to not quit until this fascist regime is stopped!

World Can't Wait-Hawai`i had an awesome contingent in last Monday's MLK Day Parade!  About 40 people joined our contingent led by the Hawaii J20 and the Refuse Fascism banners.  Our truck delivered a great big NO! to the Trump/Pence Regime.   The response from the people lining the street was enthusiastic.  Many clapped and chanted; thousands raised their cell phones, i-pads and cameras and took photos to beam around the world. 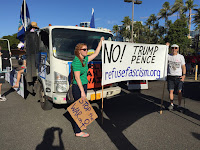 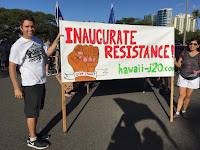 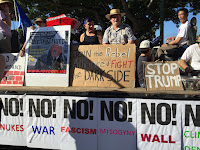 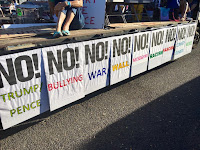 Throughout the week we had a table at UH-Manoa's Campus Center to distribute flyers to build for J20, and on Wednesday we organized sign-making at the Sustainability Courtyard.

J20 Actions!
When we arrived at UH-Manoa Friday morning (inauguration day) a large american flag messages written on the stripes was hanging upside down from one of the buildings.  A group of students were playing Macklemore's "Fuck Donald Trump" on an amplified speaker in Campus Center, and students began chalking the sidewalks and malls.  The Art Building sported a big banner and soon students began launching T-shirts onto McCarthy Mall from the 2nd floor.  A number of departments held seminars and workshops:  on protest music, climate change, Black Lives Matter, attacks on Muslims, and much more.  Some of us remarked that we didn't think that there had been such a day on the UH-Manoa campus since the Vietnam War!! 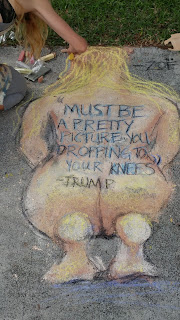 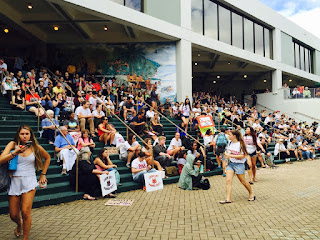 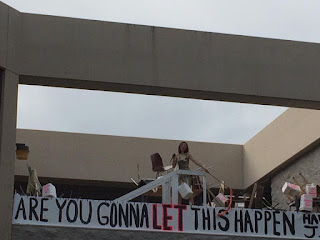 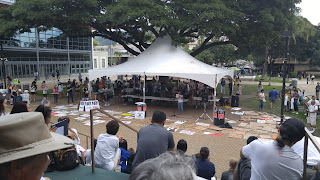 Before noon a silk-screening set-up was printing shirts in the Campus Center courtyard, signs were laid out on sidewalks, and protest music was being amplified.  Three "sound carts" filled the campus courtyard with a drumbeat, and a puppet and dancers swooped in.  At noon a teach-in with a line-up of "experts" laid out the dangerous and fascist nature of the Trump/Pence Agenda.   Hundreds of students filled both sides of the campus steps and  and courtyard.

At 2:30 more than 500 UH-Manoa students and faculty began to march.   Another group, gradually growing to about 100, left the Honolulu Zoo, and another group left Ala Moana Park.  All converged at Gateway Park, where even more people joined them.  The assembly was by then a beautiful mix of people -- young and old, some who were participating in their first protest and others who were veterans of many.   Creative signs reflected a huge variety of concerns.  Energy was high.  Drumming and chants filled the streets and echoed from high rises where tourists were summoned to lanais by the sounds:  "No Trump - No KKK - No Fascist USA" Then everyone went together to the front of Trump Hotel, where chanting and drumming continued.

Hundreds then walked the length of Kalakaua to the Waikiki Shell, where an amazing free concert featured all-star bands:  Makana (with John Cruz), Black Square, Jammerek, Taimane and more!  World Can't Wait-Hawai`i, along with a dozen other organization, had booths where people could sign up and get involved.

The day had a real "no business as usual" atmosphere, and there was a huge outpouring of concern, anger, and fear about the future that was expressed in so many ways:   At the same time, there was a celebratory feeling in the air - a feeling of new beginning of activism, and a sense of hope in the power of the people. 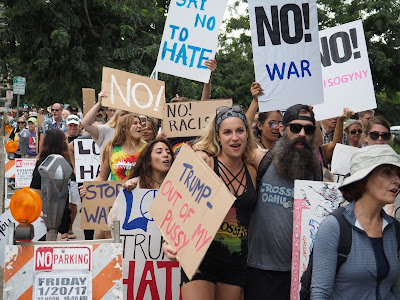 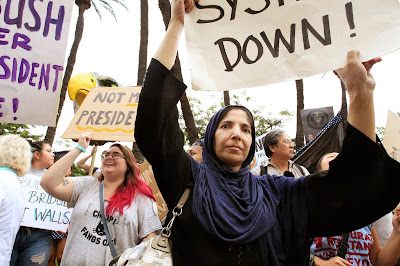 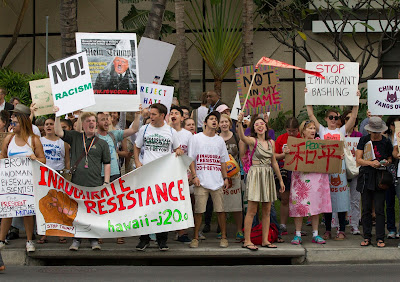 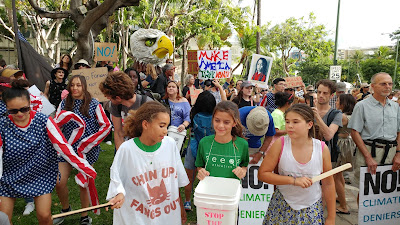 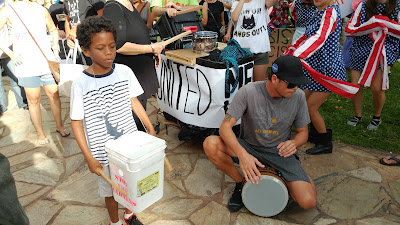 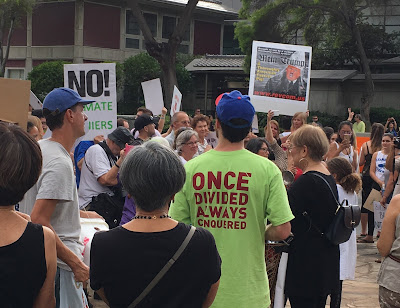 And then on to the amazing Women's Day March on Saturday!

Posted by World Can't Wait Honolulu at 8:34 PM No comments:

Join Our Contingent in the MLK Day Parade!
Gather between 8-9am at Magic Island
Parade steps off at 9am 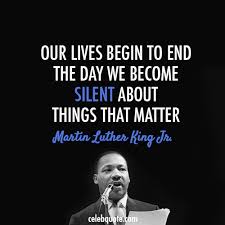 The MLK Day Parade attracts more than a thousand participants, and thousands more line Kalakaua Avenue to watch.  We aim to distribute thousands of leaflets and call on tourists and residents alike to join J20 events.   Bring your signs reflecting your concerns about the Trump Administration.

This is a family-friendly event.  Strollers, bicycles, scooters and skateboards are fine.  There will be a flatbed truck for those who would like to ride the route.  To find us, look for the blue earth flags.  Don't forget your water and sunscreen.  Organize your friends, your family, your co-workers, and your classmates.  Put it up on facebook and social media.   For more info see previous post.

Calendar of events organized by World Can't Wait this week

Thursday, Jan 12, 7pm-9pm
Friends Meeting House (Quakers), 2426 Oahu Avenue
Open discussion on the Urgency of the Opposing the Trump/Pence Administration
What's planned?  What's been Done?  Is Stopping the Trump Pence Administration possible?
Get into all of this with a spirit of urgency and mutual respect for differing ideas.

Friday, January 13, 4-5:30pm
Signholding at the corner of Atkinson/Ala Moana
World Can't Wait-Hawai`i has organized 6 friday signholdings since his election.  Thousands have seen us and many have been heartened by our presence.  Many of honked horns, given us the thumbs up, or raised their fists. Of course a few have opposed us, but they are in the minority!  This will be the last before Inauguration Day.  Join us to build for J20! 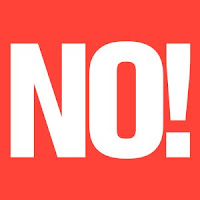 Get your chalk now so you have chalk in hand on the morning of J20.  Chalk the sidewalk inNO Trump/Pence Administration!  NO Racism!   No mysogyny!   NO climate denial!  NO Fascism!  NO Walls!  NO Deportations!....and more!   Put up a sign or hang a banner at your business, in your classroom, or anywhere else you're able.


Go to one of the discussions, classes, seminars, or art happenings on the morning of J20!   There will be many activities on the UH-Manoa campus, and more are being planned.  All are open to the public.   Then join the big Teach-In at the UH Manoa Campus Center at noon!


Call, e-mail, text your contacts and organize your own contingent of friends to join you in the afternoon march!   There will be  four gathering places for feeder marches: 2:30 at UH-Manoa Campus Center; 3pm at Ala Moana Park (near the Diamond Head entrance); 3pm in front of Honolulu Zoo; 3pm at the small park on the ewa side of King/Kalakaua (on King Street).   All four marches will converge at Gateway Park (at the intersection of Kalakaua/Kuhio in Waikiki), and then go together to Trump Hotel.    More information on the J20 website.

For National News/Messages about J20, go to http://www.refusefascism.com and http://www.worldcantwait.net.
Posted by World Can't Wait Honolulu at 7:15 PM No comments:

Build Resistance to the Trump/Pence Regime
in the MLK Day Parade!
Gather at Magic Island, Ala Moana Park, by 9am
(look for the blue world flag)

World Can't Wait-Hawai`i has had a contingent in the MLK Day Parade for the last 15 years, but this year there is a new urgency to our message.

Donald Trump champions white supremacy and whips up a racist lynch-mob mentality. He has viciously attacked Mexicans and Muslims and incites fear and hate of all who are “different”  He crudely demeans and degrades women. He denies science and has called climate change a hoax.  He is a militarist threatens to use nuclear weapons and has has appointed a cabinet filled with billionaires and generals to implement his agenda.

People of conscience are filled with fear, disgust and anger.

World Can't Wait-Hawai`i supports the Refuse Fascism initiative and this year's contingent is intent on building massive resistance to the Trump/Pence government on Inauguration Day (January 20) and beyond.

Not only do more than a thousand people participate in this parade, but many more line the sidewalks along Kalakaua Avenue.  We'll be calling on everyone in Waikiki (residents and tourists alike) to join the J20 Day of Resistance on January 20.

Spread the word.  Bring your family, friends, classmates and colleagues.  As the RefuseFascism statement states
:
“Imagine if people, in the tens of millions, filled the streets, powerfully declaring that this regime is illegitimate and demanding that it not be allowed to rule! The whole political landscape would be dramatically transformed, every faction within the established power structure would be forced to respond—and all this could well lead to a situation in which this fascist regime is actually prevented from ruling. This is not some idle dream but something which could be made a reality if all those who hate what is represented by this fascist regime translate their outrage into firm determination and massive mobilization to create the conditions which make this possible.”

Everyone who hates everything Donald Trump and cabinet represents is urged to join this contingent.   We'll have a flatbed truck and those who can't walk the route are invited to ride. Bring your sign, water and noisemakers.  Most importantly, bring your friends!

Posted by World Can't Wait Honolulu at 5:53 PM No comments: