Regardless of whether you voted...No matter who wins
We Must Be In the Streets,
Beginning the Day After the Midterm Elections
TO DEMAND AND DEMONSTRATE OUR DETERMINATION THAT:

IN THE NAME OF HUMANITY, THE TRUMP/PENCE REGIME MUST GO!


This is not a “normal” election season.
11 people murdered in a synagogue while they worshipped, allegedly by a man with a terrifying record of unbridled antisemitism.
15 pipe bombs sent to former presidents, high ranking officials, media institutions, and others who have been repeatedly targeted by Trump.
Two Black people murdered, allegedly by a man who spewed racist epithets and had just been denied entry to an African-American church.
Through it all, Trump never backed off his hate-filled, fascist rhetoric on the campaign trail. Rather, he ramped it up.
Trump’s “Make America Great Again” is a 21st century fascist program of Manifest Destiny – “America First” – wrapped in the flag and Mike Pence’s Bible taken literally, with a program of white supremacy, misogyny, and xenophobia.
Stopping this rapidly escalating fascism cannot be done through the normal process of elections!
Millions of us are shocked and horrified by what is happening, but that only matters if we dare to act in a way that can stop this nightmare. Ultimately, this means millions in the streets day after day, refusing to stop until the whole regime has been removed.
On November 7th and November 10th, join a different kind of protest movement, one that refuses to get swept up in another election cycle that buys our silence and capitulation to fascism, and instead demonstrates our singular demand and determination that:
NO! In the Name of Humanity,We REFUSE to Accept a Fascist America!

Be part of the movement to end this nightmare!   Organize your friends, your family, and your classmates to be on the streets on November 7 and 10.  Organize carpools.  Download and distribute leaflets; put up posters at your school and in your neighborhood.  Share the local event pages for November 7 and November 10.  Spread the word everywhere!
Posted by World Can't Wait Honolulu at 2:59 PM No comments:

On Saturday, July 7, there will be a dramatic silent march to protest RIMPAC.   We'll begin with a press conference at 10am just outside of the Halawa Gate and in front of the big U.S. Pacific Fleet Headquarters sign at the corner of Halawa Drive and Kamehameha Highway.   The march will be very short (about a half mile total) and will go along Kamehameha Highway to the Arizona Memorial and back.

Because parking is difficult in the area, a chartered trolley will leave the corner of Atkinson/Ala Moana (in Ala Moana Park) at 9:30am.  Call 944-3106 for reservations.  You can also take city buses Nos. 6 and 40.  The trolley will then pick us up and take us back to the starting point.  Check regularly for more info on transportation. 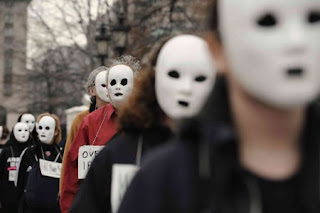 We ask everyone to wear a black and white shirt.  White masks will be provided.   The white masks are commonly used by anti-war protesters around the world.

RIMPAC  is largest maritime military exercise in the world.  It causes irreparable damage to sea life, reefs and shorelines and poisons our groundwater.   Huge live-fire exercises at Pōhakuloa contaminate our land.   We will not be silent in the face of such destruction nor be complicit in “war games” to prepare for wars of aggression against the peoples of other countries.

Continue to the previous post to read World Can't Wait-Hawai`i's statement against RIMPAC.

A leaflet calling people to the anti-RIMPAC action was posted earlier.  For ongoing news go to our facebook.

A schedule of actions/events being called by other organizations will be posted here in the near future.

There will be signmaking for the June 30th action on Sunday afternoon, June 24, from 12noon-2pm.

Posted by World Can't Wait Honolulu at 4:39 PM No comments:

Last week Defense Secretary Mattis announced that the U.S. Pacific Command, the military’s largest geographical area command based in Honolulu, has a new name: “U.S. Indo-Pacific Command.”  According to Mattis, this formalizes the U.S.’s commitment to “stretch beyond East Asia and into the subcontinent, in part to better compete with China and Iran.”   This change in name also overtly expresses the U.S.’s determination to exercise military control of the region just prior to Mattis’s series of meetings with leaders of Indo-Pacific countries at the 2018 International Institute for Strategic Studies Shangri-La Dialogue in Singapore.  Under Trump’s administration, the Pentagon has prioritized a stronger relationship with India, in particular, which is seen as an essential supporter in maintaining shipping lanes which are currently being challenged by China, as well as support for U.S. wars in Afghanistan, the Middle East and Africa.


This change takes place just before the Rim of the Pacific Military Exercise (RIMPAC),  the largest maritime military exercise in the world.   This year 26 nations, more than 25,000 personnel, 45 ships, 5 submarines, and 250 planes are expected to participate in the month-long “war games” in Hawai`i in order to better prepare the U.S. for wars of aggression in the Indo-Pacific – an area that now stretches from the coasts of the Americas to the coasts of Africa, India, and Middle eastern countries.


RIMPAC exercises have been conducted biennially since 1971, but this year’s June exercises are the largest ever and a reflection of both the U.S.’s military expansion and contention.  China, which was previously a participant, has been suddenly “disinvited.”   Israel, with its close proximity to Iran, has been invited to participate.   As the Trump administration continues Obama’s “Pivot to the Pacific” (now renamed the “Pacific Rebalance” by the Trump Regime), it is anticipated that these “war games” will grow, sending an ominous message to the people of the world, as well as to people in Hawai`i.


In the face of this, a number of community organizations are beginning to mobilize against RIMPAC, mainly calling attention to the tremendous environmental harm caused by these exercises .  Ships are towed out to sea and then targeted with missiles and torpedoes until they sink to a watery graveyard on the ocean floor where they leach toxic chemicals which accumulate in the bodies of fish, dolphins and whales.  Amphibious landing exercises, damage reefs, erode shoreline, and endanger wildlife.  Military sonar and underwater bomb detonations drive dolphins and whales from feeding areas, causing them to beach in panic, interfering with communication and mating, causing hemorrhages and embolisms in their bodies.  Military personnel from 26 countries leave their ships to “practice with the entire gamut of weapons systems, everything from the pistol all the way up to 84mm rockets and missiles” at Pohakuloa Training Area, the largest life-fire training area in the U.S. and located on the island of Hawai`i.


RIMPAC begins on June 27th and a variety of events opposing it are being planned.  Actions at Pearl Harbor are being called.  Forums, poetry readings, and film showings are being held and a petition is circulating (https://www.change.org/p/for-people-land-air-sea-stop-rimpac-military-exercises).   Military personnel will be leafleted when they come ashore.


The U.S. military has done, and continues to do, irreparable damage to Hawai`i’s people, land, air and sea.  Areas that have been used for live fire training and bombing practice are uninhabitable.  Indigenous Hawaiian cultural sites have been destroyed.  Military fuel storage tanks are leaking poisons into the drinking water in Hawai`i's most populous city. Vast areas of land and water are so toxic as to be unusable.  In a state where land is extremely limited the U.S. military occupies a larger percentage of land than in any other state, paying only $1/year for each base or tract.  This has contributed to making Hawai`i #1 in cost of living, as well as in homelessness.


The damage the U.S. military has done, and continues to do in Hawai`i is criminal and cannot be accepted.   At the same time, while carrying out struggles against RIMPAC and further military expansion, people in Hawai`i have to at the same time recognize that an even greater crime against the world is being committed.   These “war games,” are not only harmful Hawai`i but are preparation for carrying out wars against other countries and peoples.   Anti-war activists in Hawai’i often refer to Hawai`i as the head of the “he’e” (octopus).  This head has arms – arms that spread across the entire Pacific.  An anti-war activist in Cambodia told us, “When I hear the word “Hawai`i”, I don’t think about Paradise.  I think about the B-52’s that flew from Hawai`i to kill us.”  This is what the RIMPAC “games” are about. 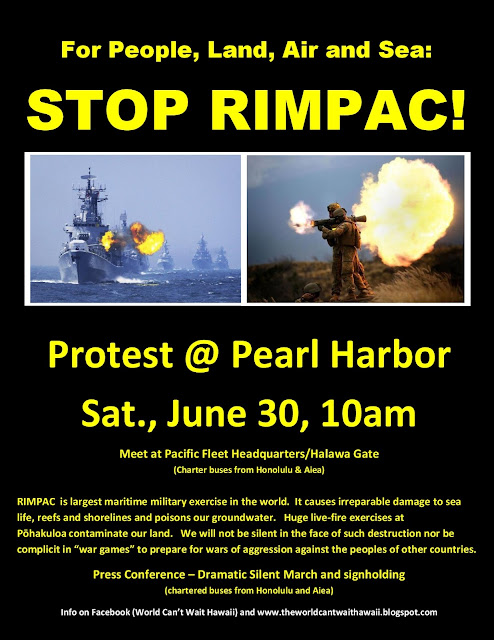 Posted by World Can't Wait Honolulu at 3:58 PM No comments:

Email ThisBlogThis!Share to TwitterShare to FacebookShare to Pinterest
Message to our Readers:


A year of racism, misogyny, war, xenophobia, fascist attacks on civil rights, and planet destruction!
On the one-year anniversary of the Trump/Pence Regime rock Waikiki with our demand to End the Nightmare!

Gather at Gateway Park (at the corner of Kalakaua/Kuhio near the entrance to Waikiki) at 5pm to hold signs before taking off for a visible and noisy march through Waikiki's restaurant district to Trump Tower at 5:30. The march begins at Gateway Park, goes along Kalakaua Avenue to Lewers, turns right on Lewers to Kalia, and then up Saratoga. There will be a noisy stop at Trump Tower on Saratoga Road before returning to Gateway Park. The march is less than one mile.

Bring your signs. your noisemakers and drums, your energy, and your friends.

To avoid parking in Waikiki take the bus from Ala Moana or walk from Ala Wai Park, or bike it. The cheapest parking nearby is at the Kalakaua Plaza at $7 for two hours (on Kalakaimoku Street; about a block away). Other (more expensive) parking is available on Kalia Road at and the Waikiki post office on Saratoga).
Posted by World Can't Wait Honolulu at 5:08 PM No comments:

Join our Contingent in the MLK Day Parade!

This Nightmare Must End!
The Trump/Pence Regime Must Go!

All individuals and organizations who oppose the Trump/Pence Regime are invited to join the World Can't Wait-Refuse/Fascism contingent in the Annual MLK Day Parade.

A year after the Trump/Pence Regime took power we are living in a nightmare that must be opposed! Bring your own signs or pick up one of ours. This is a family event and is safe for kids. Scooters and wagons welcome. We'll have a flatbed truck and those who are unable to walk are invited to ride. Let's make this the strongest, loudest, and most determined contingent ever!

Our contingent will begin forming at 8am at Magic Island. Look for the blue world flags on our truck. The parade begins at 9am and will proceed along Kalakaua Avenue to Kapiolani Park. You can then ride back to Magic Island or stay for the Unity Rally at Kapiolani Park for an afternoon of music, food, and much more.
World Can't Wait-Hawai`i has had a contingent in this parade every year and every time we are greeted with applause and fists in the air.   Join us and make this the largest and loudest contingent ever!   For more information go to our facebook event page here.   Following are a photos from previous parades. 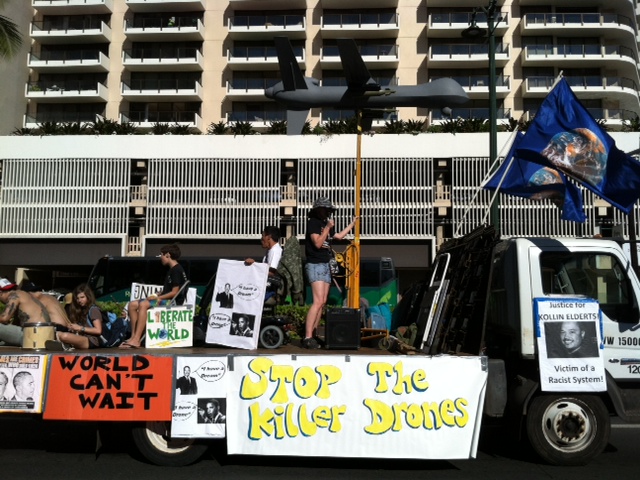 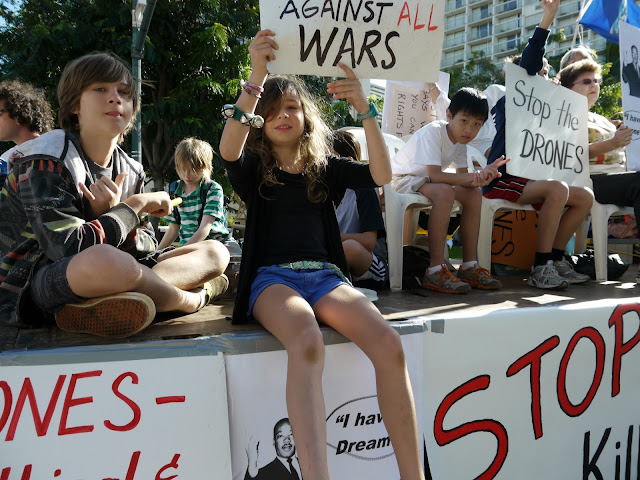 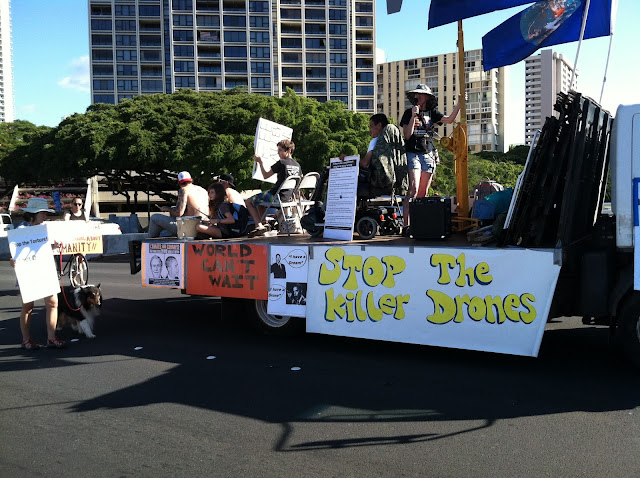 Posted by World Can't Wait Honolulu at 7:13 PM No comments: